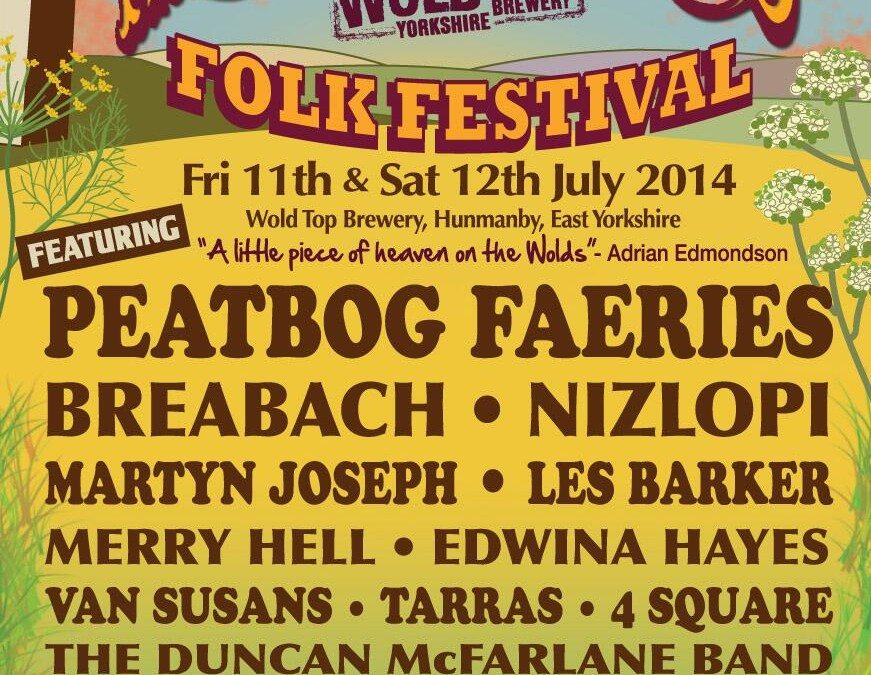 With the GPS set at ‘somewhere on the North Yorkshire Wolds’ and the windows on both sides of the car wound down as far as they could possibly go, I made my way north to my first Moonbeams Festival.

Leila Cooper, music promoter, people person and general all round good egg, has been putting this festival on for about six years now and having been told by a number of people just how wonderful the event is, I marked the dates in the Northern Sky diary in thick black indelible ink, dog-eared the corner of the page and just to be on the safe side, popped a book mark in there too. This year I was definitely going to my first Moonbeams Festival to see what it’s all about.

The weather was particularly kind on Friday afternoon as I negotiated the narrow lanes leading up towards the small village of Hunmanby, home of the nearby Wold Top Brewery (yes, this festival takes place in a brewery!), possibly too kind judging by the red arms hanging out some of the passing car windows. Scuttling along the narrow lanes suitable for one vehicle only, I soon caught sight of the tip of the yellow and blue circus marquee in the distance, which would house the main stage over the weekend.

There was an immediate sense of community as I approached the camping area, with both stewards and fellow campers alike offering help with directions and tent erecting skills respectively. With a light breeze up on the Wolds, it was handy to have my newfound weekend neighbours Ronnie and Andy around to help keep my tent this side of Filey. Even on a hot sunny day, the Wolds can soon drum up the occasional strong breeze.

Once I was suitably settled in my new environment, I was eager to look around the festival site and familiarise myself with the geography, which was made all the more easier for me with Leila by my side to give me a guided tour. Five minutes later I was completely up to speed and fully aware that those who visit the festival don’t have to do an awful lot of walking, everything being in such close proximity.

My basic senses were immediately aroused by the blend of sights, sounds and smells combined; the colourful garden and courtyard in full bloom, bands sound checking on both stages (the main stage and the garden stage) together with the enticing aroma of the legendary Moonbeams curry being served. The anticipation was tangible as friends of the festival new and old began to arrive.

Once all the tents, tourers and camper vans were in place, the Nick Rooke Band delivered a fine opening performance on the garden stage, finding an immediate rapport with everyone in the packed marquee as Gerry and Ani McNeice made sure the band sounded as good as they possibly could. The Moonbeams Festival 2014 was underway.

After the two opening sets, the second set provided by the all-female five-piece Raven, both bands effectively easing the festival into action, the main stage was all sound-checked and ready to go as Andy Atkinson took to the stage to introduce a humdinger of a concert featuring Peatbog Faeries, Breabach and the newly revitalised 4 Square. The new line-up of the four-piece band features the dextrous mandolin playing of Michael Giverin, together with Nicola Lyons, Jim Molyneux and Dan Day on fiddle, piano and percussion respectively. Nicola also threw in some clog dancing for good measure.

After the young band’s opening set, the audience was treated to a veritable feast of Scottish music supplied by two of the finest Celtic bands on the music scene today. The contrasting sounds of the two highly distinctive bands, kept the momentum going throughout the evening, with Breabach providing a handful of songs to augment what was essentially an instrumental concert. It was the highly charged energy of Peatbog Faeries though that caught the imagination of the audience, the band giving a powerhouse performance that truly saw the festival in.